“WHEN THEY KILL ME, DON’T CRY FOR ME, BUT PRAY FOR ME”

Today is already eight years form the beginning of the eternal life of our dear brother and sincere pastor Fr. Daniel Sysoev!

A priest once wrote these words in his last book: “The best end, which only a Christian can imagine, is a martyric death.” These words were written by the murdered priest Daniel Sysoev. His Holiness the patriarch wrote in his message: “The Lord honored his faithful servant with a confessor’s and martyr’s death, and he now abides in the Synaxis of the saints among the righteous, in the Synaxis of spirits made perfect.” St. John Chrysostom once said, “It is not only death that makes martyrs, but the whole dispensation of life.” But the whole dispensation of life.

Fr. Daniel’s mother, Matushka Anna, said, “He grew up a very weak boy, and was near death three times, not distinguished by such a fighting nature as he later had, when he became a priest. He was a very bookish person, always reading books, which led to him needing glasses. Then he went to school. Remember, he was born in ’74; it was ’81 when he was seven—the peak of Soviet life. He missed the beginning of class in September in second grade. His homeroom teacher came to our house and suddenly saw a circle of icons. She was in shock. She told the headmaster, she talked about it at the teachers’ meeting, and they began to brainwash him, overloading him with books from the library. His physics teacher even brought some kind of device to our house (maybe you remember from when you studied), which produced lightning, saying, ‘Look, son, it’s not God in Heaven, and it’s not the prophet Elijah making the lightning—there’s no miracle here—it’s just this device.’ And nothing helped. Once his teacher stood him in front of the entire class and said, ‘Laugh at him. What, you believe in God? What, you know some prayers?’ My son said, ‘Yes, I believe in God, and I know some prayers.’ His confession began in second grade. He was the black sheep in those times, you know—Soviet, terrible godless, a-religious times. When he was six, our family spiritual father, an archimandrite, once asked him, ‘Danyush,[1] what do you want to be—a married priest or a monk?’ And he answered, ‘No, neither.’ ‘Then what?’ ‘The patriarch.’ He was always a maximalist.” 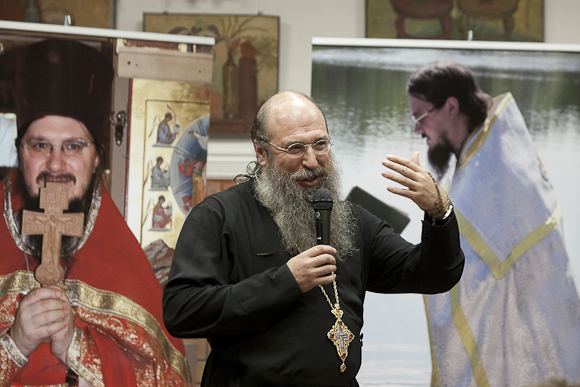 Archimandrite Melchisedek speaks about Fr. Daniel at an evening held in his honor. Photo: pravmir.ru

I remember, his classmate that he lived with in the same cell for four years at the Holy Trinity-St. Sergius Lavra, said, “He didn’t listen to the teacher in class. He would read books. He was surrounded by books. When we asked him, ‘Why don’t you listen to the teacher?’ he answered, ‘I’ve already read all that.’ But when the teacher would suddenly say something not quite right, he immediately noticed: ‘I’m sorry, but St. Symeon the New Theologian said about that subject…’ The teacher wouldn’t even know how to answer. Such was his knowledge. He told one friend, ‘I can read two-three books a day.’ He was a very shy person. When he was a deacon, having just finished seminary, he would gather dozens and hundreds of people for Bible talks at the Krutitsy podvoriye. I was there for these talks. If you didn’t say bye to him on time, then you couldn’t get out of the hall, because there were so many people. It was impossible to push through to him, and he lived for it; he breathed it.”

He had a choice. Many might think that, in fact, an unexpected death is not a martyric death. Why? But when there is no choice. But remember the words of St. John Chrysostom: “A martyric death comes not only at the moment of death, but is born from the whole will of man.” He received death threats fourteen times. He told his matushka, “I will not live to see thirty-three.” They spoke for a long time between themselves before that, about who would bury whom, and he said, “Let’s pray about it.” And Matushka said, “No, I feel that I will die before you.” And eventually, when he began to pray about it, he said, “No, most likely you will bury me. I think I won’t live to see thirty-three.” “Who will you leave us to?” “Oh,” he said, “I will leave you in reliable hands.” “Whose?” Matushka asked. “The Mother of God’s.”

It was a premonition, and a real sense of death. Matushka Julia said, “I’ve had the impression the last few weeks that death is breathing down my neck.”

The church where Fr. Daniel served was small. When his murderer entered the church, there’s some stairs to the second floor there just inside the door, that the regent, Vladimir Strelbitsky came down. The killer saw his cassock and shot the regent, wounding him in the shoulder, and two women who were there cried out. Fr. Daniel, in the altar, preparing to hear someone’s confession, must have heard this shot, or the women’s cries. And when the murderer yelled out, “Where is Sysoev?! Where is Sysoev?!” it was impossible not to hear it. Fr. Daniel walked out and answered the killer, “That’s me!” He was wounded in the neck, in the carotid artery, and when he fell to the floor, he was fatally shot in the back of the head, and the bullet went through, right through, into the floor of the church. He had a choice. He could have sat it out in the altar, or hidden, escaping through the attic. He didn’t do that.

When we read from the Old Testament on the day of the repose of a martyr, we read these words: He, being made perfect in a short time, fulfilled a long time (Wis. 4:13). It’s possible to live a long time and do nothing for God, for man, or for the Church. And it’s possible to live a short life, but when it’s with God it will be a long life before God, despite the fact that the number of years is not so large.

Not long before his death he told his daughter, “When they kill me, don’t cry for me, but pray for me.” We know that when we pray for sinful people, the Lord hears our prayers and gives them His merciful aid and strength. When we pray for the righteous, this prayer returns to us—our love returns to us.

We have gained a martyr in Heaven, a confessor of Christ, and an intercessor before God for us sinners.

Eternal and blessed memory to the ever-memorable murdered Priest Daniel!!!

We're sending you an email to confirm your address. Once it's confirmed, you'll receive updates from us.

Please be kind, lest your comment go the way of Babylon.

About the Editor of Orthodox Ethos

The Managing Editor of Orthodox Ethos is John Coffman.

Born on his family farm in Central Illinois, John always had an interest in Scripture, theology, and history which God used to lead him to Holy Orthodoxy. He was baptized into the Body of Christ at Holy Cross Antiochian Orthodox Church in Yakima, Washington, in 2010. After some years he was asked by several clergy to enter into the Antiochian House of Studies, at which his projects focused on catechetical work, culminating in a catechetical analysis of the Wisdom of Sirach in the form of daily readings during Great Lent. After spending about a year of struggle at St. Anthony’s Greek Orthodox Monastery in Arizona and Philotheou Monastery on Mt. Athos, he received a blessing to return to the world, marry and finish his Master’s work by writing a thesis entitled: Orthodox Catechism in a Neo-Pagan World: Catechizing Today’s Idolatrous World Following the Example of our Holy Fathers. The text is soon to be published by the Antiochian House of Studies Press. In October of 2020, John became the Assistant General Manager at Uncut Mountain Press. Shortly thereafter he became a senior editor at The Orthodox Ethos. He is now tasked with the launch of the new Uncut Mountain Press website and book releases, while also developing, editing and publishing articles based upon or by the saints, elders, and ascetics of our time for the benefit and upbuilding of the faithful.

We're sending you an email to confirm your address. Once it's confirmed, you'll receive updates from us.

Orthodox Ethos is a collective effort of nearly a dozen Orthodox Christians, ordained and lay. Our purpose is to present and support the Orthodox truth, way and life, which is Christ Himself.

Get in touch with us at team@orthodoxethos.com

Next step: Check your email for a confirmation link.